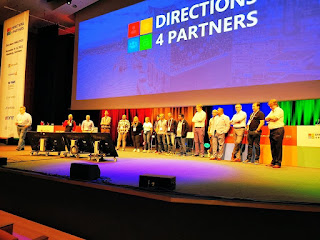 Meet the Microsoft MVP Session
Wow, what an amazing conference this year in Germany. This is my second year in attendance in this international event and I was surprised to see the improvements and amount of growth since we last met in Milan last year. 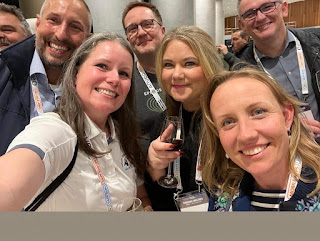 It was so exciting to attend the opening reception for Directions EMEA on Tuesday and see so many new faces and especially new women in attendance. It appears that the efforts put forth with the Women in Dynamics committee and the Microsoft partners in attendance are going well. The reception was a great time to give hugs, handshakes and smile as we enjoyed yummy appetizers and drank good wine and beer. 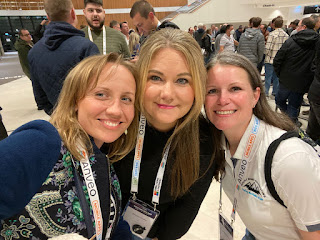 Tuesday night, Krzysztof, Jeremy and Venus organized and held the annual BC Beerinar down the street from the conference center in a fun place, called the Down Under. In attendance from all over the world was consultants, Microsoft MVPS, Microsoft and developers. It was a great social event, especially since the event was organized into a large variety of teams compromised of these groups of people. The quiz was both difficult and fun and the attendees had a great time learning BC through quiz questions, while enjoying snacks, wine and beer. Accelerynt was a proud sponsor of this event, and it was an excellent turnout and networking opportunity. We all knew Team Hops won (category: loudest) and Team Consultants lost (color books as prizes), but it was great fun to be had by all. 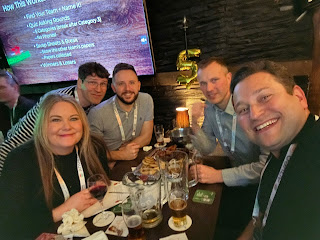 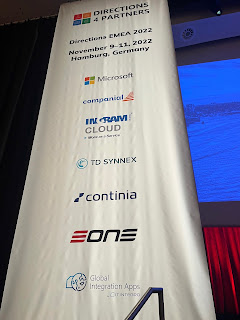 Wednesday morning, the opening session was an excellent opportunity for Microsoft to announce and show all the newly released features in 21.1. My favorite of course, was the newly announced feature, allowing all users in organizations, (with a approved Microsoft 365 license) to access Business Central data directly through Teams. This feature is in Business Central Online only and will provide users with only view only access to Business Central. This is very exciting as I feel it will put Microsoft above all our competitors in pricing and access by no longer needing a Team Viewer license. Mike Morton also announced that Business Central (BC) and the Power Platform are the largest growing business applications in the Microsoft space, with BC ranking number one. 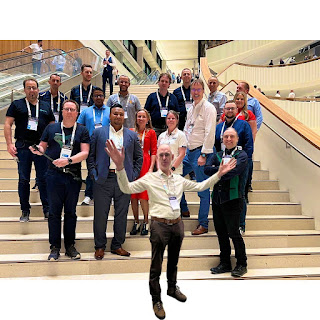 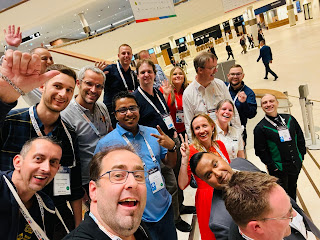 MVP Photo Shoot- The After Shoot

The sessions provide at Directions EMEA are amazing and well worth the admissions of the conference. You have a combination of Microsoft Presents, MVP sessions, consultant sessions, technical sessions and ISV sessions running parallel. No doubt that one of the hardest things this year, was deciding what session to attend and when to attend. Many of my friends spoke at this conference, including Steve Endow, Christian Lenz, Tatiana Pupko, Kristen Hosman, Krszysztof Bialowas, Tanya Henderson, AJ Asarni, and more. One of my favorite sessions was by Kristen and Krszysztof on Developers vs Consultants, Stop the Fight. They gave very practical ideas on how developers and consultants can work together, learn from each other, and work for the main team: Team Customer. 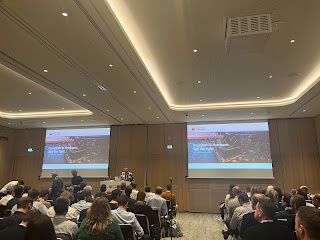 My session this year on Microsoft Teams and Business Central: A Match Made in Heaven was an amazing hit. I was able to work with Mike Cardona and Kennie two days before the event to add the new features in Teams and Power BI Telemetry to my content. With these new features, I was able to show partners how to provide amazing services to customers by introducing them to Microsoft Teams capabilities. The ability to expand and create services based on the application insights and telemetry through Power BI should provide an outline for partners to maximize their Business Central services to customers. I am offering services to the European partners to be trained on Teams and basic Power Automate features so your staff can “wow” their customers. The party the last evening, hosted by Microsoft. was an amazing event. The food was fantastic (gnocchi with tomato sauce 😊) and the music was on point. Of course, everyone’s favorite piece was when Microsoft’s own, Soren, joined the stage with his band, the NightHogs. The whole crowd began to dance, sing and enjoy celebrating another year of excellent partnership with Microsoft. It was a night to remember for sure. 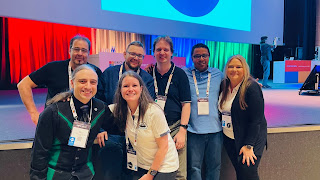 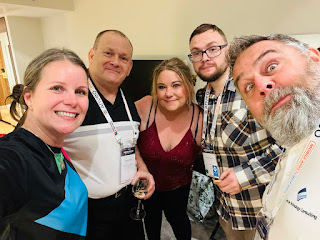 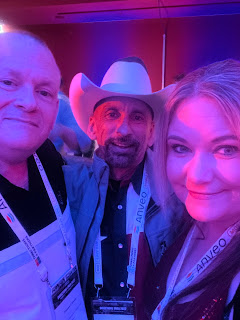 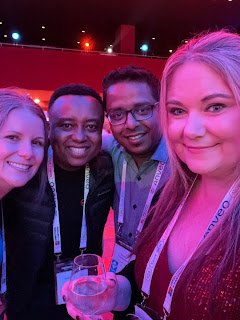 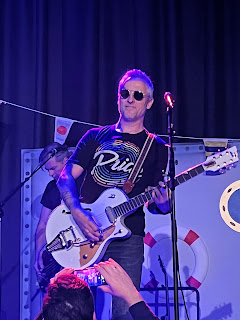 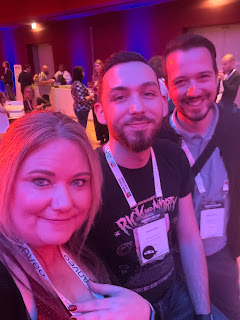 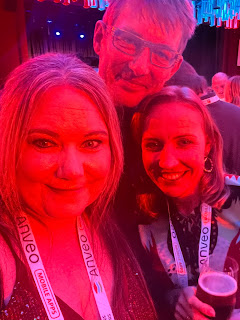 The last day was full of announcements, final sessions and goodbyes. I heard lots of positive enthusiasm about the event being held next year in Lyons, France. There was also the announcement that Directions4Partners will be hosting several other events next year under the Days of Knowledge (DOK) umbrella. As we said goodbye, we looked forward to what we will take out of the event and use in our partner practices next year, including fun and amazing new ISV apps to the portfolio. Thanks to all the sponsors for the wonderful conversation and swag. 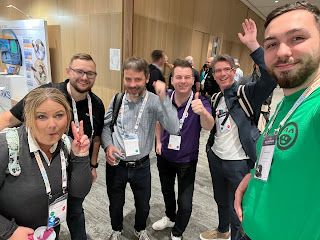 Thanks Directions 4 Partners with Love 💗

Until next year, goodbye and….See You in Lyon.

Popular posts from this blog

Every time, without fail, I need to create a phone number on an SSRS report for a client and get stuck with phone formatting. Every time I am searching forums. I thought it would be awesome if it was in some amazing blog that I could visit and copy from each time. So... here it is, if not for myself, then for others: In Report Builder or visual studio, add your phone number field to the report.  Right click on that text box where you added the field and click on expression.  Clear the formula box and type in the expression below. Formula to Use:  =IIF(Fields!Phone.Value Is Nothing, Nothing, IIF(IsNumeric(Fields!Phone.Value), Format(Val(Fields!Phone.Value), "(000) 000-0000"), Fields!Phone.Value)) Note:  My field is actually called Phone. If your field is not called phone, you will need to replace it with your phone field name. (Like: Fields!E_T_PHONE_HOME.Value) Then click on OK at the bottom of the expression box. Run your report.
Read more

Hi Everyone,   Due to popular asks from my sessions back at Directions EMEA, please see my video on how to create a Power Automate to have your customers and vendors onboard themselves using Microsoft Forms, Microsoft Teams, Dynamics 365 Business Central and Twitter.  You can try my flow at:  https://forms.office.com/r/Em6MZ7Gyr0 Questions, feel free to email me at smullins@accelerynt.com or follow me on twitter @1shannonmullin1.
Read more

- September 30, 2019
Summit is my favorite time of the year and I can't believe it is almost upon us. Here is my list of top things not to miss each year. Welcome Reception for New Users - If you are a first-time attendee, this is a must attend! Get your questions answered and bond with other newbies.  Expo Reception - Appetizers, Drinks, and Giveaways- Oh My! The first night of expo is the best one to attend while there are still free-giveaways available.Save room in your suitcase to bring all these fun little things home for yourself or the kiddos.  Expo Hall- Visit my favorite top vendors and see what all the buzz is all about: EOne Solutions, Mekorma, Nodus, Avalara, Binary Stream, Jet Reports, DocLink, AvidExchange and so, so many more.... GPUG General Session- Here is where you learn the about the newest release of Dynamics GP, discover all the award winners each year, and Bob McAdam is always a great and entertaining host.  Parties- There is always a party going on at Summit. This week t
Read more